In this article, we would like to showcase an example of Bell’s palsy recovery and how it evolves from day 1. This can help you understand better how your own recovery may progress.

This article was made possible thanks to Jay. Jay reached out to us with the details of his recovery progress. Jay had Bell’s palsy in January 2021. Since day 1 of his facial palsy, Jay decided to record his recovery using Neurological Tests to observe his progress. He wanted us to share his recovery example with all of you to help you understand how Bell’s palsy recovery happens.

Jay followed a rather quick Bell’s palsy recovery. Please keep in mind that facial palsy recovery is a very individual process and may vary from person to person. It is also important to note that when Bell’s palsy happens, you need to consult your doctor immediately. The doctor will analyze your case and prescribe any necessary medications to help prevent bigger damage to your facial nerve and avoid a long recovery scenario.

Note: the photos are used with Jay’s permission to Crystal Touch Clinic. Due to the sensitive issue of Bell’s palsy recovery, please do not reuse these photos without Jay’s consent.

Here you can see Jay’s recovery dynamics and visually see how his face was changing with the passing of time. Jay recovered most of his mimetic features within the first 3 weeks. Some fibres of the facial nerve needed some more time to recover – approximately 10 weeks. Because of this delay, Jay developed some synkinesis after his recovery finished.

The left side of his face became droopy and motionless. He immediately contacted his doctor, who diagnosed Bell’s palsy and prescribed any necessary medications.

At this time, there are no movements yet.

As seen in the photos, the tonus of his facial muscles begins to return.

The shape of his affected side becomes less droopy. This is the first sign of recovery. At this point, it is very likely that the recovery will be quick.

His Bell’s palsy is now finished. He does not suffer from acute peripheral facial paralysis anymore. From now on, Jay is in the recovery stage.

If in your case you do not see any changes by this time (no return in tonus, no movements, no vibrating or tickling feeling in the muscles), then you are most likely following a longer recovery scenario.

By the end of 3rd week of Jay’s Bell’s palsy recovery, his movements continued to return.

On the photos, you can see a significant improvement in the movement of his facial muscles. It means that most of the facial nerve fibres sustained only superficial damage. As soon as their insulation (myelin sheath) has recovered sufficiently, the nerve fibres become capable of conducting the electrical signals from the brain to the facial muscles again.

As one more week passed, Jay’s recovery continued to improve. More and more facial nerve fibres have regained their insulation and were able to conduct signals from the brain to the facial muscles.

On the photos, you can especially see the improvement in “kiss” and “balloon” expressions within this week of recovery.

By the end of 5th week of Jay’s recovery, the rate of his recovery has slowed down.

The majority of damaged facial nerve fibres have already recovered. Those fibres that sustained deeper damage may need more time to recover.

Some of Jay’s facial nerve fibres sustained a more serious damage (both the insulation and the nerve fibre itself were damaged) and needed more time until they regenerate and reconnect their respective facial muscle fibres with the brain.

As you can see, there weren’t any significant improvements. Most of his expressions are back by now, but you can see that some functions of his facial nerve did not return 100% yet.

Some facial nerve fibres in his Zygomatic branch (the “smile group”), as well as the fibres that supply signals to the Orbicularis Oculi muscle (circular muscle of the eye), have not recovered fully yet.

By the end of week 9 since Jay’s Bell’s palsy onset, you can start seeing some improvements in the recovery of the facial nerve fibres that sustained heavier damage.

From now on, his condition will continue to improve faster.

By the end of week 10, Jay’s Bell’s palsy recovery is nearly complete.

The movement in his affected mouth corner, as well as the eye, has improved. If there will be any improvements from now on, they will be incremental and barely noticeable.

The condition remained mostly unchanged. Some incremental improvements can be noticed when compared to a few weeks ago.

His recovery was rather quick. Most of his movements were restored within the first 4 weeks. Some of his facial nerve fibres sustained heavier damage and needed at least 10 weeks to recover.

Nonetheless, on these photos you can see that Jay developed some synkinesis. On the photos, you can notice that during mouth movements in “kiss”, “balloon”, “wide smile” and “grin”, his affected eye squints a little bit. Also, during “surprise” and “eye shut” expressions, his mouth corner moves just a little bit.

Development of synkinesis after recovery

Jay’s synkinesis is not heavy, yet, it still exists. So why did it happen if Jay’s recovery was quite quick?

As we know from the experience of other patients that come to our clinic, if the recovery takes longer than 2-3 weeks, synkinesis and some other complications are very likely to appear.

Some of Jay’s facial nerve fibres in the Zygomatic branch (the “smile group”) and the branch that supplies signals to the circular muscle of the eye, sustained heavier damage. We can see that based on a longer recovery time for his mouth corner and his eye. Those branches took at least 10 weeks to recover. This led to the development of complications – synkinesis.

Synkinesis does not develop directly. As you can see in the example with Jay, at week 16 his recovery was complete and there was no synkinesis yet. Jay noticed that he was started to experience some synkinesis only around August.

Whether complications develop or not and how long it takes until they appear is very individual. From our experience, if some facial nerve fibres needed a longer time to recover, complications are likely to happen. Depending on the length and complexity of recovery, they may be more or less pronounced and may take a longer time until they start appearing. As a rule of thumb, we noticed that complications take approximately as much time to appear, as the full return of facial movements required. In most situations, it is possible to work on reducing them following professional rehabilitation techniques.

At Crystal Touch we developed Neuro-Proprioceptive Rehabilitation method specifically to target synkinesis and other complications. It is a non-invasive method that focuses on changing pathological mimetic patterns in your brain.

To discuss what can be done in your specific case if you suffer from complications after Bell’s palsy, please sign up for a Video Diagnostic analysis. During this video analysis, we will answer your questions, explain what improvements are possible if you follow Neuro-Proprioceptic Rehabilitation program, as well as give advice on what you can start doing by yourself. Complications and residuals are not a life sentence. They can be improved. 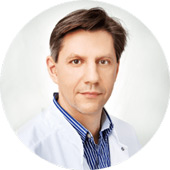 The session’s purpose is to analyse your condition and provide you with detailed answers about your current state and the future prospects of recovery. During the video session, we also share hands-on recommendations that you can start doing on your own to alleviate some issues that you are facing. 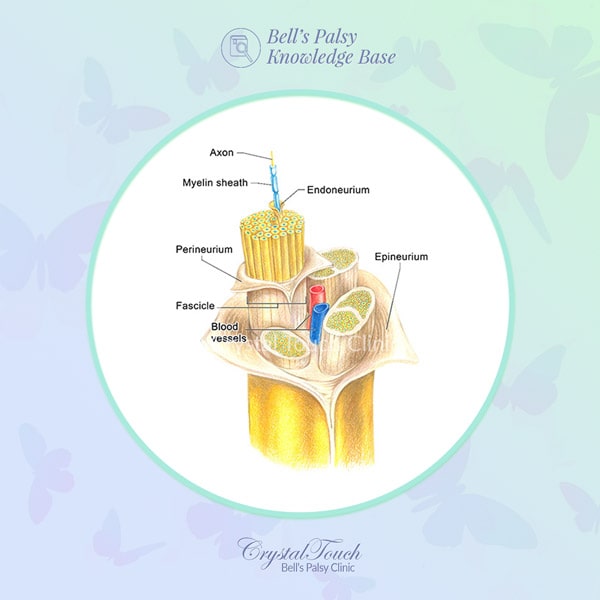 What is the structure and function of the facial nerve?

If we want to understand how the recovery after Bell’s palsy happens, we must thoroughly know the structure of the facial nerve first. 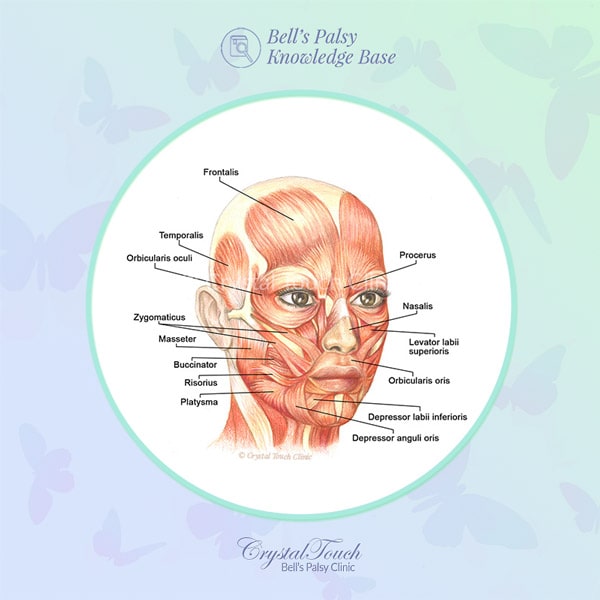 Our facial muscles and their functions

What is the function of each muscle on our face? How do they lead to a crooked smile during Bell’s palsy? 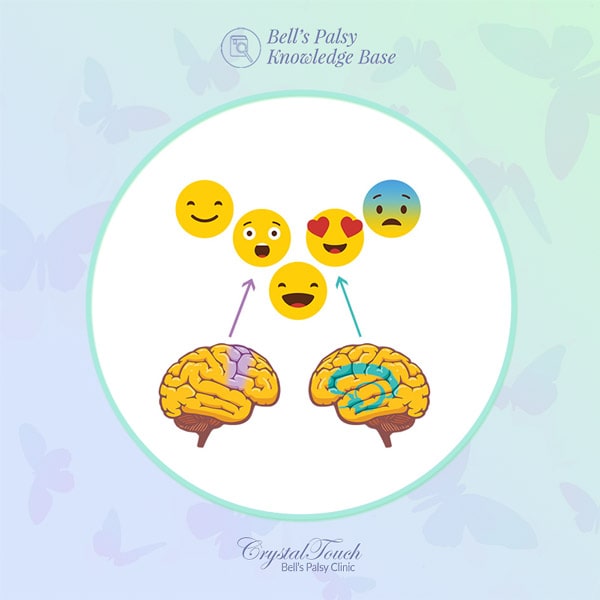 Which system in our brain controls our facial expressions during Bell’s palsy?

How does our brain decide which facial expression it should use in each situation? 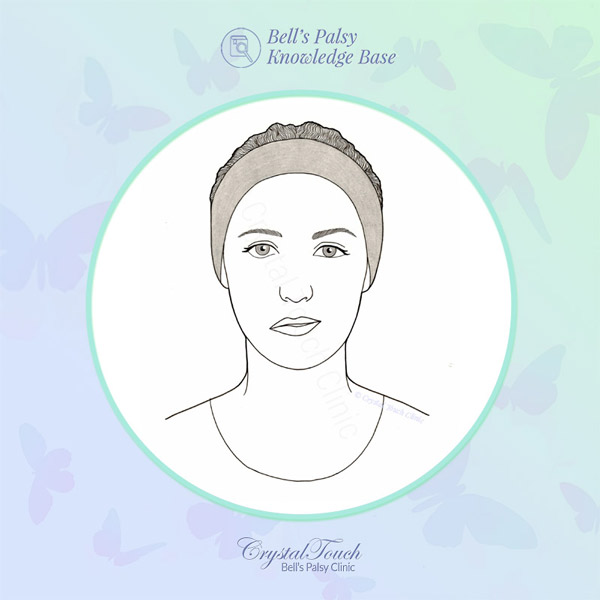 What is the difference between facial palsy and Bell’s palsy?

Bell’s palsy is a type of peripheral facial palsy. Let’s go over this in more details.

Knowledge is your first step to recovery.
Receive our Bell’s Palsy Knowledge Base updates in your email. We will also share important news from our clinic.

This website uses cookies to improve your experience while you navigate through the website. Out of these, the cookies that are categorized as necessary are stored on your browser as they are essential for the working of basic functionalities of the website. We also use third-party cookies that help us analyze and understand how you use this website. These cookies will be stored in your browser only with your consent. You also have the option to opt-out of these cookies. Opting out of some of these cookies may affect your browsing experience.
Necessary Always Enabled
Necessary cookies are absolutely essential for the website to function properly. This category only includes cookies that ensures basic functionalities and security features of the website. These cookies do not store any personal information.
Functional
Functional cookies help to perform certain functionalities like sharing the content of the website on social media platforms, collect feedbacks, and other third-party features.
Analytics
Analytical cookies are used to understand how visitors interact with the website. These cookies help provide information on metrics the number of visitors, bounce rate, traffic source, etc.
SAVE & ACCEPT
Powered by